A perfect example of the fun and creative aspects of design during the height of the Pop-Culture explosion is in the band names and their logos of the era.
In random chronological order; here ’tis : 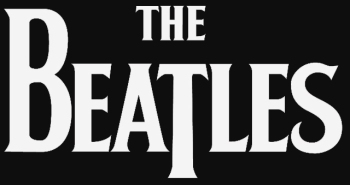 The Beatles started many trends and one that permeated the ’60s was the double-and/or-message meaning band names. The deliberately mis-spelled and/or transposed letters in bands’ names attracted attention and made claim to their name.
And then there’s the appropriation of bugs, reptiles and amphibians, which quickly included just about anything that flew, crawled or ran around. Hey, these were fun times!
00individual would like to point out and draw attention to the featured dropped “T” to emphasize the musical “Beat” aspect of the Beetle – graphically it made all the difference.

Named after the late ’50s giant ant sci-fi movie, THEM were stone Rockers, Van Morrison is soul-searing in his honest grasp of the heart of Rock ‘n’ Roll. He just kills it and so does the rest of the band.
With their impressive movie poster approach, Them grabbed a well-deserved part of the spotlight back in ’65 with “Mystic Eyes”, Here Comes The Night”, and the immortal classic “Gloria”.
Their choice was also a great way to approach a name by not choosing a traditional name. Clever, and other than The Who, it would not be until the ’80s for another band name that equaled the avoid-a-name game and that group was THE THE.

An 00individual favorite! The Yardbirds! Whether a reference to chickens in the yard, or prisoners in the yard, this elevates both to an iconic level. The look and style represents a nod to the recent past of the totally hip Cool Jazz era album cover letter art, with a definite look of the trippy force emerging in the hours just before the psychedelic dawn.

Staking claim to another clever no-name band name, The Who, showing no respect for font size, relationship or hierarchy – used a military roundel target as an anti-establishment imprint of rebellious Mod attitude. The Who then further emphasized their youthful strength and virility by extending the “o” into a male sex symbol with an arrow-tipped hard-on aiming for the Heavens. Groovy!

The Byrds were definite leaders in the West Coast Hippie sound with their electrified Dylan covers. They led the way with long hair, fringe jackets, granny glasses, beads, capes, and iconic
Psychedelic Electric Folk Rock with the best harmonies since The Beach Boys. Their logo was pretty well known and with their Fifth Dimension album cover they took it to the limit. Psychedelic!

Distinct, yet trippy, The Doors gave clarity in their band’s logo design and font choice so as to leave the heavy-lifting to be focused on Morrison’s lyrics.
Love the tasteful psychedelic Indian-esque “THE” tucked in the “d” corner. Pretty much a mind-stamp in its simplicity, and then there’s . . . 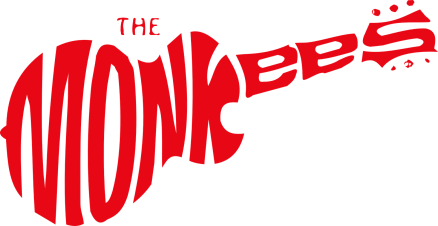 . . . Hey, Hey, no simplicity here; but a clever creative design. With the whole scene’s fixation on transposed psychedelic morphed letters the Monkees get the neck of the guitar “EE”, the “NK” is a perfect upper body and the lower body rounded “MO” – a design blessed with divine letter placement.
So far on this Top 13 list band names have evolved from Insects to Birds to Primates!
The next evolution is:

Thankfully here’s a band that righteously deserves and lives up to their band name: SPIRIT.
SPIRIT transcended Rock History with their early mastery of sophisticated Garage, Jazz-Fusion, Heavy Metal, Acoustic, Ballad and Psychedelic Rock.
With a see-thru condensed semi out-of-focus haunting font, this is the logo most associated with how Rockers know the band. Their debut was truly phenomenal – a major imprint.
But once in the Spirit World, a lot depends on personal Karma.
Are you one of the: 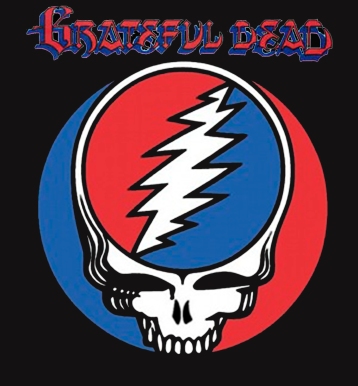 Band Names have evolved from Insects to Birds to Primates and transcended to Spirit, so there’s only one karmic state left in the Rock ‘n’ Roll evolution: The Grateful Dead.
The first and most notable and meaningful play-on-words band names, The Grateful Dead became an American entity that represented a very strong sub-culture of nomadic Rock fans.
Hippies and Free Spirits everywhere were Grateful to be “Dead”, as in no longer alive in an archaic world, therefore proud to be Dead (Alive) in a new world.
The most recognized Dead logo was initially used by roadies to quickly identify their sound equipment, cases, etc. and became a bold graphic imprint.

The stately font appears to be a 1968 mutant Century Gothic super-condensed – but with this band the focus is on the band name itself.
The East Coast admittedly weren’t able to participate in the same ’60s “climate” as did the West Coast in the “Love-In” days. So to rep the gritty East Coast Love Vibe, no group ever delivered those feelings harder and more beautiful than The Velvet Underground.
The Velvet Underground righteously deserved and lived up to their band name perfectly as reflected in the spirit of their music – smooth, luxurious overground, with an underground filled with Rock. 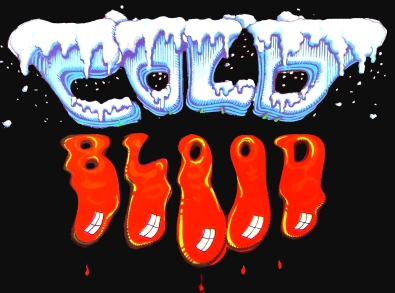 This Top 13 list could easily consist of Rick Griffin‘s incredible Rock Band artwork for peak culture iconic images that defined the ’60s.
Here’s a contraction of Griffin’s logo for the San Francisco Jazz Blues Rock group with a film noir name, Cold Blood, fronted by the Joplin-esque vocals of Lydia Pense.
Remember that these were the first times anyone had seen these types of images done with satiric and artistic flair. What may seem trite today, was new and a trip back then.

So, out of all of Pink Floyd‘s studio albums, only about a third have non-consistent fonts or styles that even state PINK FLOYD on the album covers. So, 00individual combined the Twilight Zone with the Psychedelic Zone and offers up his own concoction.
“There is a fifth dimension beyond that which is known to man. It is a dimension as vast as space and as timeless as infinity. It is the middle ground between light and shadow, between science and superstition, and it lies between the pit of man’s fears and the summit of his knowledge. This is the dimension of imagination. It is an area which we call PINK FLOYD! 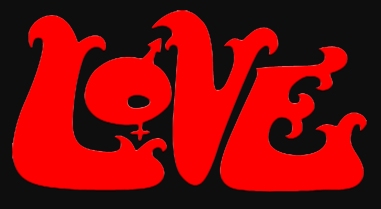 And finally, the Best for Last. As if pre-destined to be the bearers of the single most precious element in any World, Arthur Lee and band did more than just fullfill the expectations of a pretty heavy name, but in doing so defined a unique element of the Rock World.
The LOVE logo is fun, representing the mood of the ’60s, the coy yet appropriate placement of the male / female sex symbols seem to be gently caressed by the welcoming L and V- all lovely unless maybe they’re about to be eaten! Those letters look pretty big and thick, they’re probably hungry all of the time – oh, 00individual gets it, LOVE forever changes . . .

00individual acknowledges all of the creative people involved who actually made these logos happen in all of the art department, marketing and art direction positions in all of the record companies back when they could.

– Please disregard any advertisements that may appear on this site –
00individual does not endorse nor receive any payment of any kind from any advertiser(s).

Silver Birch was a spirit guide who spoke through Maurice Barbanell （1902-1981）, founder and editor of the Psychic News of London , England

Enjoyable Information. Focused or Not.

"I have enough time to rest, but I don't have a minute to waste". Come and catch me with your wise words and we will have some fun with our words of wisdom.

The Power of Story

Phantom of the Backlots

The Errant Endeavors of Ela the Expert

God gave Noah the rainbow sign, No more water, the fire next time

Who did Harry Potter ever beat?

Hello,everyone! This is a blog about fitness, healthy food, and all what we love. Here you will find advices, ideas and motivation to change your life. If you think it is impossible, you are wrong, you can do it!

We're the sum of ourselves.

We are all just babes in the woods.

Plant a seed in the field of opportunity

A refugee's journey - Vietnam to Australia

Pain goes in, love comes out.

hold a mirror up to life.....are there layers you can see?

Art that Expresses the Heart

Expression of my heart

Words are the only thing left holding me together

Thrills, Spills, and just a dash of Romance

One writer's experiences, and battles with words

Recipes showing step by step directions with pictures and a printable recipe card.

This world's so mixed up everywhere you go

I want to be rich. Rich in love, rich in health, rich in laughter, rich in adventure and rich in knowledge. You?

BY GRACE THROUGH FAITH

all questions answered all answers questioned

One Step at a Time